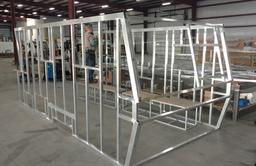 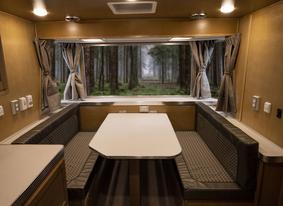 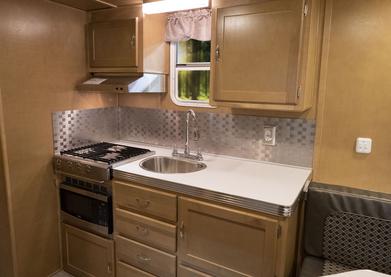 Back in 1959, David Holmes, President of gift basket company Harry and David, Inc in Medford, Oregon, needed a way to keep his employees busy during the company's off-season.  January to July was the slowest for the gift basket business.  Therefore, he decided to put his life-long interest in travel trailers and modern design to use.  The company used fruit basket employees to manufacture high-end travel trailers with a modern design.

These "Holiday House" travel trailers were an aluminum skin over wood frame construction, but the design was all-together different from the "box on wheels" campers built by other manufacturers.  Production began on November 2, 1959 and reached its peak by February of 1960.  The company offered 17, 19 and 24 foot models.  the 24 was the lone tandem axle trailer offered by the company.

Arguably the best made, and definitely the most stylish,

Holiday House trailer trailers were priced  well above the

Production ended in January 1962.  In short, that is how

Over the past five decades, multiple companies have owned

the “Holiday House” brand, but none have continued

production of travel trailers under the name. Certain vintage

RV features and some styling have been “borrowed” by other

companies, some to a larger extent than others, but none

of “built first-class and equipped first-class”.  With the exception of only a few, most current RV manufacturers use similar, lower quality construction methods and bland exterior styling. These companies choose speed, efficiency and profit margin over style, quality and reputation.

This all changed in 2014, when ownership once again transferred, this time with the sole intent of building RV’s and honoring the tradition, style and allure associated with the “Holiday House” brand. The new owners are passionate about recreational vehicles and have a true appreciation of classic design. This is the same passion and interest which drove David Holmes to start Holiday House  back in 1959.

A team of veteran designers, engineers and product managers was assembled, and the “Holiday House” Continuation Series was created. Production began in August 2017 of the 18 foot model, picking up where the original team left off. These first units were produced on a contract basis, utilizing an existing production facility and workforce.

Not intended to be a clone or copy-cat, the new Holiday House RV's are redesigned from the ground up. Very similar to the original in look and feel, most casual RV’ers won’t know if it is an original or part of the Continuation Series. The owners however, will know it’s built upon an all-aluminum, all-tube, welded chassis and riding on torsion axles. The walls roof and floor are also welded aluminum, and create a structurally sound, six-sided cage.  This is very different than how conventional RV's are manufactured, it's not the fastest, easiest or least expensive way to build a camper, but it does render the strongest possible frame available.

The hardwood wall paneling and cabinet and

drawer fronts are consistent with the original,

but the modern appliances, air conditioning

and full bathroom add to convenience and

Most importantly, the signature “World View

ed at the front of each model, and the exterior

“log cabin” style metal is true to the original.

The objective is not to replace the original

Holiday House trailers or to take away from

their place in history, but rather continue in the founder’s footsteps and allowing many more to experience the thrill of ownership. You need to look no further than the automotive industry as an example… Just as Chevrolet re-introduced the Camaro and Dodge re-introduced the Challenger, Holiday House will ignite the passion in multiple generations of enthusiasts.  Through the “Continuation Series" there will be a significant increase in awareness and focus on the founding principles of "Holiday House".

In March of 2018, the owners of the Holiday House brand relocated the operation to a dedicated facility in Elkhart, IN. The enthusiasm generated by its introduction at the 2017 Elkhart Open House attracted new investors and a production partner with over 40 years of experience in building quality RV’s.  We are excited to have you see for yourself what has made and continues to make Holiday House the iconic brand that it has become. 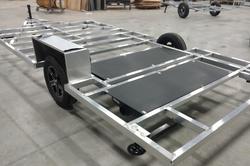 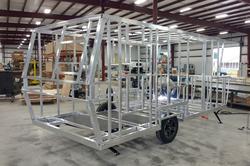 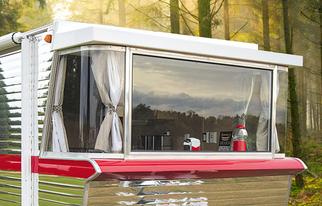 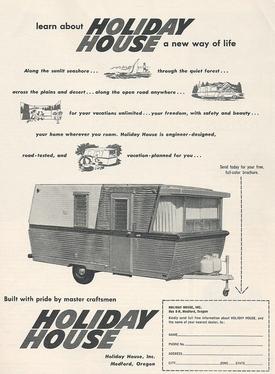